Congress is dealing with an ever-increasing volume of constituent communications with progressively fewer resources and outdated rules that govern how Members of Congress can and cannot talk to citizens. In a polarized political era, the infrastructure for civic engagement in Congress is under strain. Members of Congress are increasingly isolated from their constituents, with fewer face-to-face interactions in town hall meetings and a fear of communicating substantive positions on major issues lest they invite attack. Budget cuts that went into effect starting in 2011 — that have been carried forward throughout the decade — have led to a dramatic reduction in the use of franked mail, an important tool for Congressional offices to keep constituents informed. These same budget cuts have reduced the size of the average Congressional office, and the staff that remains is being paid less in real terms, making it harder to retain a talented workforce.

These trends challenge our Constitutional system of checks and balances. A Legislative Branch paralyzed by partisanship with fewer expert staff cannot effectively discharge its duties under Article I of the U.S. Constitution, providing a check on the Executive Branch and minimizing the number of disputes that must be resolved by an unelected judiciary. As the body of government closest to the people, the U.S. House of Representatives has a special role in channeling the public voice and informing citizens of what their government is doing. Congress’s ability to have a two-way conversation with the American people is at risk.

In challenging times, the communications landscape in Congress continues to change rapidly, mirroring changes in society as a whole. Congress has an expanding array of new tools to reach citizens, and in many cases, to do so at little or no cost. New technology also means that the people have an increased ability to talk back, with a growing volume of inbound constituent correspondence, especially since the 2016 election. The typical Congressional office has more potential for two-way communication with citizens than ever before in history. But our research finds that actual communication remains limited by resources — staffing and time constraints, and by rules — the maze of franking and ethics restrictions governing what House offices can say using taxpayer dollars. 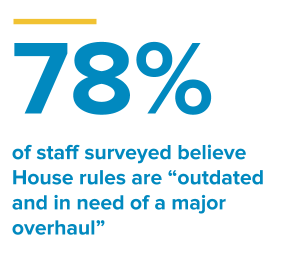 Outdated Rules are the Number One Obstacle to Effective Communication

House staff are frustrated with the rules governing communications. Fully 78% of staff surveyed agreed that House communications rules are “outdated and in need of a major overhaul” versus just 12% who agreed with the idea that the rules “work well and are not in need of a major overhaul.” When asked in an open-ended way about their top communications challenge, nearly four in ten cited franking rules, with staff equally critical of their outdated nature and a slow approval process. Significant numbers of staff also cited budgetary constraints and an overwhelming volume of constituent messages as key challenges. 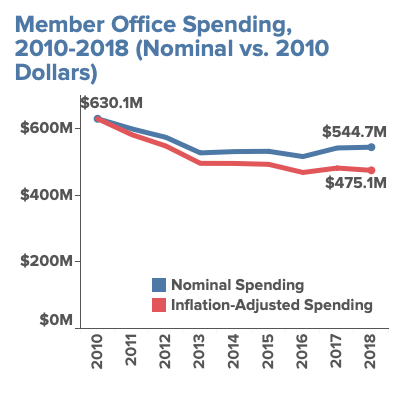 Member Office Budgets Have Declined by 25% in Real Terms Since 2010, Affecting Both Legislative and Communications Capacity

The House’s capacity to manage both the tremendous volume of communication and the growing complexity of communications mediums is undermined by budgets that have declined sharply in inflation-adjusted terms over the last decade. Franked mail budgets were the first casualty, declining by 40% after 2010, and they have never recovered. Adjusted for inflation, office budget levels were 25% below 2010 levels, and the lowest yet in the time period. In our survey, 88% of House staff called increasing the Members’ Representational Allowance, or MRA, the budget for each office, an extremely or very important priority, more than any other potential reform idea tested. 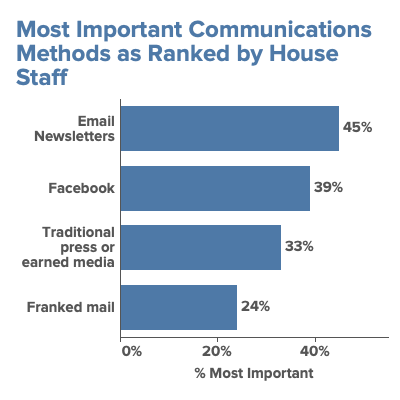 While Member offices have an expanding array of options for communicating with constituents, in practice only a few are considered essential. Email newsletters were considered the most important communications channel, with 45% of offices saying this was one of their top two methods. This was followed by Facebook at 39%, traditional press or earned media at 33%, and franked mail at 24%. Nothing else garnered a response in double digits. These answers demonstrate the growing dominance of digital media in constituent communications, with digital channels eclipsing more traditional forms. At the individual office level, this focusing tendency is more palpable. Our conversations revealed a desire to direct resources to the one method perceived as most effective. Those offices that excelled at one mode of communication reported devoting two or three staff members to the task. That is the equivalent of their entire communications staff for most offices.

Hostile feedback from constituents was an undercurrent of many of our conversations with Hill offices, particularly when the topic was social media. The number of extremely partisan, negative, or “trolling” reactions prevented many offices from seeing social media as a venue for constructive two-way dialogue. Fear of negative backlash may also prompt Members to withdraw from actively engaging with constituents. Many offices said they had tried to find alternatives to town hall meetings because of protests or disruption. Vendors and other offices described an aversion to proactive communications in certain offices, motivated by fear of taking stands that would invite political attacks.

Texting, AI, and Messaging Top the List of Most Intriguing New Technologies

Social media was once new and is now thoroughly integrated into the fabric of Congress, with 94% of offices in our survey using Facebook, 92% using Twitter, and 67% using Instagram. Of new technologies on the horizon, offices expressed the most interest in using texting (27%), artificial intelligence to sort and respond to constituent mail (20%), and a messaging app like Facebook Messenger (14%). Yet adoption to date is limited, with just one office reporting the use of texting. Staffing constraints were again and again cited as a barrier to adoption. With a statutory limit of 18 full time staff, and an average of 4 staff devoted to communications, Chiefs of Staff felt limited in adopting promising new technologies without being able to devote staff to manage these new platforms.

One Way or Another, Change is Coming

Our research paints a picture of a House laboring under growing constraints that are both rules- and resource-driven. But help may be on the way.

The rules of the 116th Congress adopted on January 4, 2019 established a Select Committee on the Modernization of Congress to hear from experts and draft bipartisan legislation to improve the functioning of the People’s House. An initial resolution with 30 recommendations was introduced on December 10, 2019, and the Committee’s work has been extended through the end of the current Congress, during which it will continue its work developing proposals to alleviate numerous institutional challenges, including staffing constraints, outdated technology, and lackluster information sharing.

At the same time, lawmakers have undertaken an extensive rewriting and simplification of House franking rules, the regulations governing taxpayer-funded communications with constituents. First instituted after court intervention in the 1970s, these rules governed the content of mass mailings to constituents, requiring bipartisan approval of all pieces and limiting excessively self-promotional or campaign-like messages. The rules adopted for hard copy mail came to embrace many forms of digital communications, but many guidelines, such as rules governing the size of photos measured in inches, were nonsensical when applied to new digital mediums and have now been scrapped.

The new rules that went into effect at the start of 2020 aim to modernize communications in the House by simplifying content regulations and shortening the approval process. But they are only a first step. Based on conversations with staff, we recommend codifying many of the changes already proposed with legislation and building on them by:

On the Front Lines

Communications on a Budget

Appendix — A History of Congressional Communications